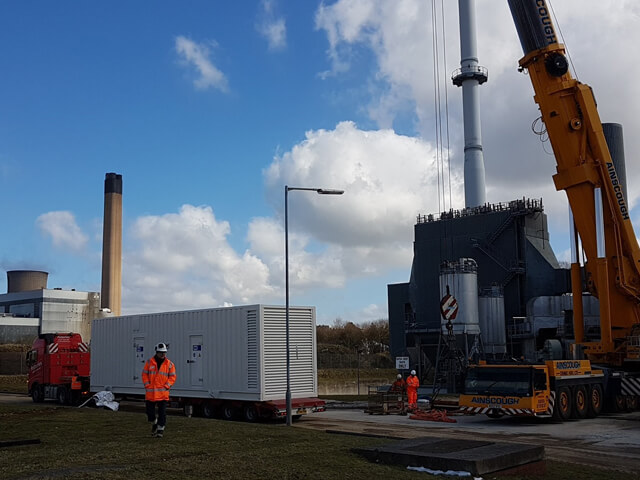 The very large glass making factory owned by St Gobain and located at Ferrybridge in West Yorkshire has been in continuous use since the furnace was lit in 1999. Such is the critical nature of the ½ kilometre production line that neither the continuous flow of glass inside nor the furnace itself must never be allowed to cool and hence a reliable electricity supply is essential.

To that end we were recently asked to augment the original HV standby diesel generators with an additional 2.5MVA, 11kV synchronised generator as well the associated civils works to support it. We also provided bulk fuel storage and completely renewed the ageing existing automatic control system and provide compatibility with the new generator set for both standby and grid connected triad avoidance purposes and integration with the site wide PLC controls.

The work was split into two distinct phases being the upgrade of the old generator control system whereby one generator at a time was taken offline, all the old controls were carefully removed with particular attention being paid to the interface with the site PLC as the site was of course continuing to manufacture during the whole period of the works.

A temporary HV standby generator was supplied and installed for those periods when either of the original generators were not available for duty.

As anticipated the nearby site switchroom prevented the crane from positioning very near to the generator final position and a large 500T capacity crane was brought in to undertake the contract lift from the delivery vehicle and onto its purpose built plinth. Once the generator was safely in place we then brought in the fuel tank and roof mounted exhaust silencer to complete the works for the day.

For the remainder of the week the new generator was connected to its new control panel which was already installed in the suite of three new panels that had been made ready and the new and the old generators were paralleled together to provide over 5MVA of standby power which was also able to soft return to mains after an outage as well as peak shave to reduce costs during Triad periods.

At GMI Power Solutions we want to keep you up to date with our recent work at GMI Power.

We have recently completed 2 supply and installation projects for a major Supermarket’s home shopping centres.

GMI Power Solutions Ltd offer premium Power Generation solutions for businesses throughout the UK. Our wide range of in-house services can provide a complete turnkey project from design through to installation.

This website uses cookies to improve your experience while you navigate through the website. Out of these, the cookies that are categorized as necessary are stored on your browser as they are essential for the working of basic functionalities of the website. We also use third-party cookies that help us analyze and understand how you use this website. These cookies will be stored in your browser only with your consent. You also have the option to opt-out of these cookies. But opting out of some of these cookies may affect your browsing experience.
Necessary Always Enabled
Necessary cookies are absolutely essential for the website to function properly. This category only includes cookies that ensures basic functionalities and security features of the website. These cookies do not store any personal information.
Non-necessary
Any cookies that may not be particularly necessary for the website to function and is used specifically to collect user personal data via analytics, ads, other embedded contents are termed as non-necessary cookies. It is mandatory to procure user consent prior to running these cookies on your website.
SAVE & ACCEPT